We came back full of inspiration and clear development paths after two intense days of collective work in our first Goteathon at MediaLab Prado. In this event, we had the privileged opportunity of co-creating scenarios and defining needs along with numerous people from several institutions, all of them with different roles and interest in the type of indicators and open data that Goteo is starting to provide.

To that end, we've been able to count on the European Cultural Foundation which, besides having supported the development of the first version of our API, joined us in this meeting along with part of the development team of ECF Labs and colleagues from the other hubs, members of our network Connected Action for the Commons. As a group, we gathered valuable contributions from people in a variety of roles including researchers, disseminators and Goteo end users, with various and complementary views, approaches and interests around the values and opportunities to be found in our platform’s campaigns and communities.

Rather than starting out directly with code development work as is typical in a hackathon, we began our Goteathon as we usually do in our co-creation workshops, by defining different user-oriented scenarios so that the full potential of the group could be brought to homogeneously map the subsequent potential of specific digital tools or projects. This time, after discussing some subjects in a consultation prior to the call, we predefined three major areas in which to consider open data and visualizations: tools to facilitate the work of campaigns promoters, matchfunding calls and their impact, and finally, more generally about the confluence of crowdfunding and the common good. This is an area that we at Goteo have been especially interested in from day one, along with - fortunately - more and more institutions every day.

In parallel with defining possible data visualizations, these two days also contained on-site field visits to several projects co-financed in Madrid via Goteo, including Makerspace Madrid and Campo de Cebada. We also had a public presentation of other projects by people with whom we share interests, along with crowdfunding experience. David Cabo of Civio joined us to explain his process in the different open data campaigns that gave us tremendous inspiration in their day. We also had a presentation of the tracking process of collective returns after crowdfunding campaigns conducted by our partner Vicky Anderica. Finally, an introduction to the results of the research project Mapping "Below the Radar" Organizations in Crowdfunding Platforms was presented by María Botella. 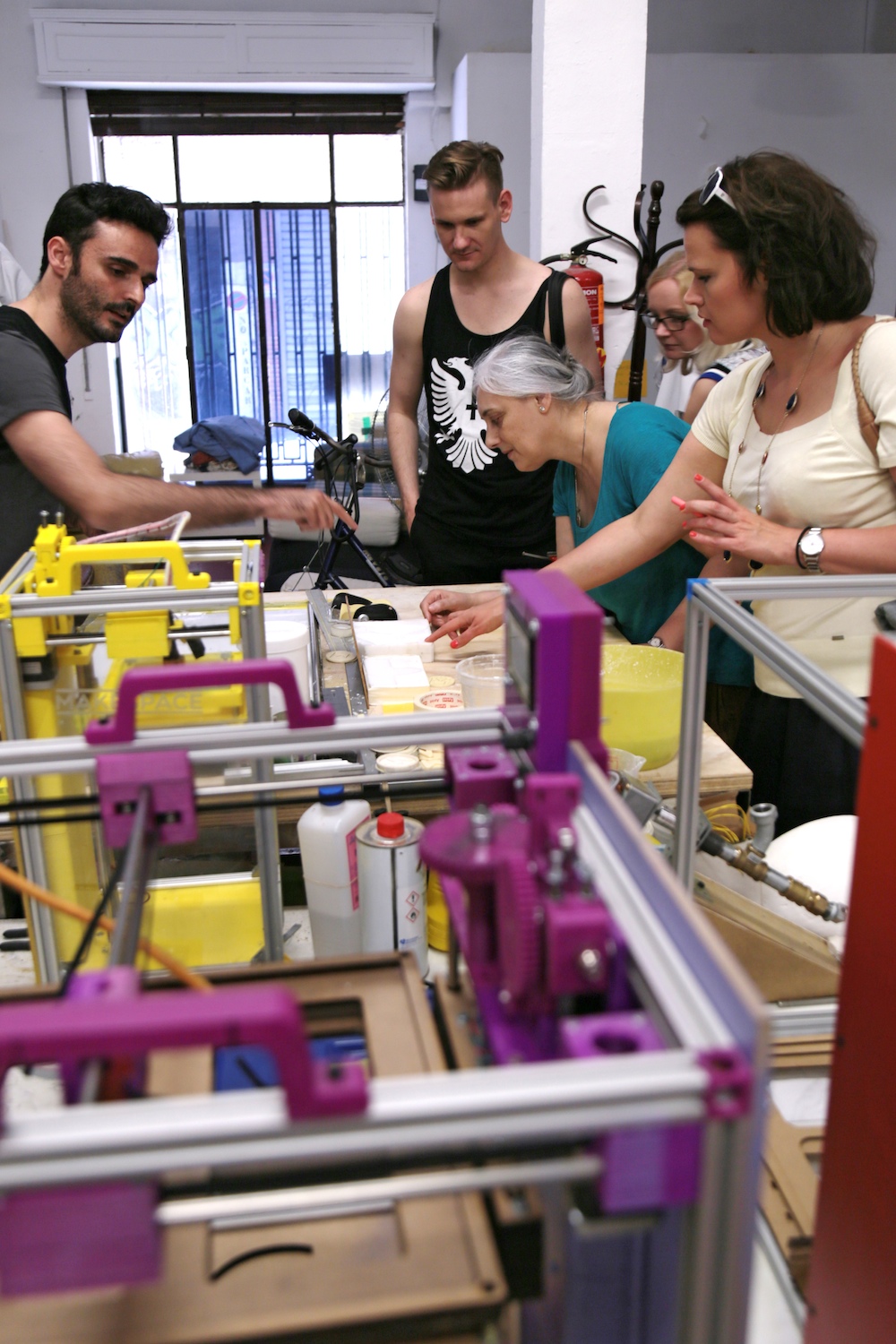 In the second phase of the Goteathon, once we collectively selected the scenarios that sparked the most interest among different groups of participants, we decided to focus on four user stories that required further definition and exploration, preceded by a presentation of the data currently accessible from the Goteo API and others in the works.

The Fundraising / Matchfunding group proceeded from the need to visualize the matchfunding flows in Goteo, those additional funds provided by institutions and organizations and used in our matching/crowdfunding campaigns to multiply the resources and impact of projects on particular themes. After having experienced 8 matchfunding calls, we have collected valuable data to continue helping projects build broader communities, and for matchfunder organizations to communicate the benefits and impact of this hybrid matchmaker funding model.

With this in mind, a possible scenario was defined for visualizing the projects’ needs from data that could be extracted from their budget descriptions, but also the non-monetary needs and objectives of the project itself within their impact areas in the cities. These could correspond to our previously defined project categories. However, studying the possibilities of extracting these data highlighted the need to establish a more complete and complex option in the form of a more semantic categorization of projects. This option could be approached by creating project category tags. In the not too distant future, this could help us detect the trends or issues that can reach high visibility at any moment through crowdfunding campaigns, or even to detect problems occurring in cities and exposed by the "crowd", and being addressed with participatory, bottom-up solutions.

From the group OpenData 4 the Commons, the result of the proposed scenarios led to a fruitful and broad discussion of what would be a display or visualization of the network of endorsers or supporters around crowdfunding campaigns, as a sort of "Open Endorsements Map", apart from the crowdfunders.

What’s important is to create and bring attention to a map of trust displaying users who are to some degree influential in certain fields of activity or campaign categories, linked with an existing Goteo user profile known as a "recommender" or “mentor” profile, which in the end we have opted to call an “endorser”.

Originally, this profile corresponded with the existence of certain opinion-leaders in the form of individuals or organizations in the Goteo community who have acted as "fundraisers" and/or project sponsors, with a proven ability to attract many other crowdfunders. To further the effect of this influential profile, it is given prominent visibility on the campaign page under the video presentation and linked to the user page, offering a full description of their activities, interests and visualizations of projects which they have recommended and/or funded.

This line of development could allow the visual map of donations and support for a campaign to be set for different levels of participation, with multiple layers and entries of possible support, which on one hand could invite participation from a wider range of people and organizations, and on the other, could help highlight the scope and impact of the campaign. This could be a very interesting approach for the development of our Connected Action for the Commons network, whose emerging, flexible process could in time open endless possibilities so that other people and organizations active in various areas of political relevance could align with our mission and actions. It also opens a gateway for discussion, and we look forward to exploring together with all of the organizations forming this group within this program of the European Cultural Foundation. 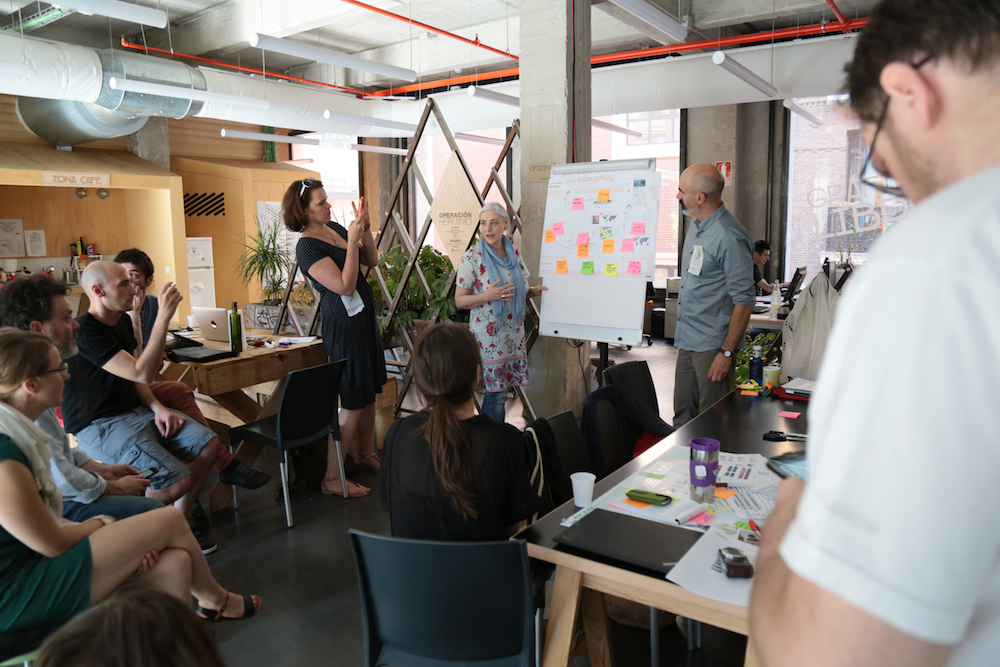 The group on visualization tools for campaign promoters started from the finding that recurrent users or “multidonors” who contribute to more than one Goteo campaign can be good indicators when crossing their data (keeping personal data private) with other types of campaigns and new keywords that can be generated. Thus, new proposals could visualize campaigns that have ended successfully, and contact their promoters so that they can offer help or useful clues based on their experiences.

Another option derived from this group, among several possibilities that were settled on and contrasted, would be based on a similar data crossing process to visualize the degree of recurrence in contributions by users, but also of the users who refuse to receive the individual rewards offered from a group of specific campaigns. This visualization could work as an indicator related to "generosity", which could be represented by the key fact of the license chosen for the project’s collective returns. This is another output that will help us advise and provide examples to new campaign promoters, once again according to specific categories.